Comments Off on Pontedera Hotels 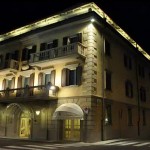 Enclosed in a charming palace of the XIX century, the Armonia Hotel is a great place to stay for those who want to discover the cultural and naturalistic treasures and taste the best of the typical produce of the Tuscany. The Hotel has 23 twin & double rooms and 4 suite, all finely and smartly furnished. All the rooms have color tv sat., private bathroom with bathtub and shower, minibar, safe box, hair-dryer, ADSL fast-line for Internet connections, air-conditioning/heating, direct telephone, soundproofed walls, Free Wi-Fi.

The La Pace Hotel, recently renovated, is located in the center of Pontedera, in convenient location close to shopping, bars and restaurants, 200 meters from the railway station.
Located close to the main roads that make just a short distance from the main cities of art in Tuscany, such as Pisa, Florence and Lucca, makes it an ideal place to spend a pleasant holiday art and relaxation. www.albergolapacepontedera.it